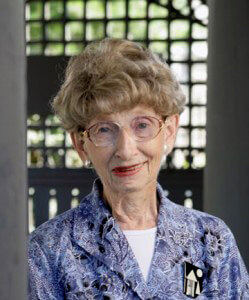 Annette Rafferty was born in Worcester in 1930 and is a product of the Worcester and Oxford public schools, as well as a graduate of Elms College, Assumption College, and the Ecumenical Institute. She taught in Holyoke, MA; Newport, RI; and Springfield, MA as a Sister of St. Joseph, returning to her native city in 1969 to teach at the old St. Peter’s High School.

Her life changed dramatically when, in the early 1970s, she was asked by the Director of the Urban Ministry Commission to head up a task force to determine the need and response to the “new homeless” – women and their children. She served as chair for two years. When the Urban Ministry Commission decided not to proceed with a shelter at that time, Annette resigned. She knew she had to act after many nights spent speaking with homeless women, hearing their stories and gathering statistics.

“More than research and statistic gathering had occurred in these past two years,” Annette describes in her first memoir, Wearing Smooth the Path: 25 Years at Abby’s House, “My heart had become invested in following through on my findings. What had begun as an interesting task had succeeded in changing my life. . . The opening of a shelter for women couldn’t wait and neither could I.”

In 1976, she and a group of courageous women opened Abby’s House on June 7th after two and a half years of grassroots organizing. Annette eventually left the Congregation to give full attention to what became her life’s work.

Over the course of more than forty years, Annette nurtured and grew Abby’s House, inspiring countless people to become involved and to join her in carrying out our mission. In June of 2016, Annette officially retired from Abby’s House, but she has not stepped away. Although she has retired from her daily work, she remains committed to helping make the world better for the women and children we serve.

“We love what we do at Abby’s,” Annette reflects in her second memoir, Still Wearing Smooth the Path: 10 More Years at Abby’s House, “and that’s what motivates each of us, who, in her/his own inexplicable way, moves the mission forward, challenge after challenge. Abby’s belongs to all of us – staff, residents, shelter guests and volunteers. It’s as simple as that. And it’s all made possible by nearly 14,000 donors (individuals, foundations, church, civic and school groups, and local businesses). We are a grassroots community “…and I hope it will always be like this,” as Mary Oliver reminds us in her Song of the Builders.”

Welcome Kathleen Suchenski as the Volunteer and In-Kind Coordinator! She says, “I am delighted to be part of the team at Abby’s House. I have always seen myself as a mission-driven professional having spent the last 25 years teaching language, literature, and culture and directing study abroad programs at mission-driven colleges. In my new post at Abby’s, I look forward to translating many of those skills into cultivating volunteers from across the community who give so generously of their time and talents to support the housing, shelter and advocacy programs at Abby’s House. To me, Abby’s House is the embodiment of radical hospitality, offering a hope-filled future to the women and children who are welcomed here.” ... See MoreSee Less